Hi I'm Ivan. I'm a barista with over 5 years of coffee making experience. Latte Art Guide is a place where I share my love of coffee by providing coffee guides, discussions, and gear reviews.

My goal is to help you make the best coffee. So feel free to contact me if you have any coffee related questions.

Amazon Affiliate Disclosure:
We are a participant in the Amazon Services LLC Associates Program, an affiliate advertising program designed to provide a means for us to earn fees by linking to Amazon(dot)com and affiliated sites. 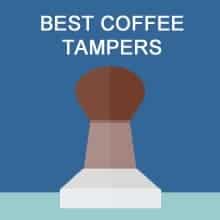 The best espresso tampers are to baristas like what sneakers are to sneaker-heads.

They're addictive to collect, look boss, and vary dramatically in price.

Anyone that knows a thing or two about making espresso knows a good tamper is important as it allows you to exert consistent pressure during the tamping motion, which is crucial for achieving a level tamp.

This lets you to replicate your results and eliminate a core variable in the coffee making process. You can see me using my tamper to get a nice, level tamp.

In this guide we're getting into the nitty-gritty of what to look out for when when getting your first espresso tamper and answering all those minute barista debates.

But for those who want a quick recommendation below you'll find my list of the best coffee tamper picks to up your barista game and pimp out your work station.

There are some very sexy tampers out there...

Read on to learn everything you need to know when buying a coffee tamper and how to make sure it's the right fit for your espresso machine.

Navigation
Best Espresso Tamper: Top 4
How To Pick The Best Coffee Tamper?
Flat vs Convex Base Tamper
The Importance of Tamper Weight
Are Calibrated Tampers Better?

How To Pick The Best Coffee Tamper?

The qualities of a good tamper are pretty straight forward:

Other than that the rest mostly comes down to personal preference.

Some people like wooden handles, others like all stainless steel, and some are advocates of calibrated tampers.

However try to avoid anything aluminium as they're too light and tend to rust over time, and be on the look out on stainless steel coated materials as they'll start chipped away a couple weeks into use.

Do I even have to mention plastic tampers? Just say no.

To avoid poorly built tampers you should try to get a tamper that costs above the $30 mark. At this price point you'll get a stainless steel base with a basic but sturdy handle. 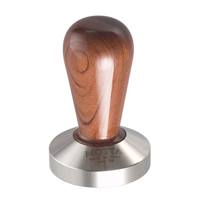 I recommend the Motta flat tamper as a good beginner tamp for a reasonable price. It comes in 58mm and 51mm sizes.

But as with all matters relating to coffee discussions about espresso tampers can get really technical and debated to the end of the earth.

Next up I'm going to be answering some key questions and debates about the best espresso tampers out there.

Flat vs Convex Base Tamper

If you read my article on the top coffee grinders you would have discovered baristas get into all sorts of debates about what type of grinder is best.

Well let me introduce you to another fierce debate in the coffee making community - flat vs convex tamper bases.

Coffee geeks are a fickle bunch.

The short story is that there's two types of tamper bases you can choose from: 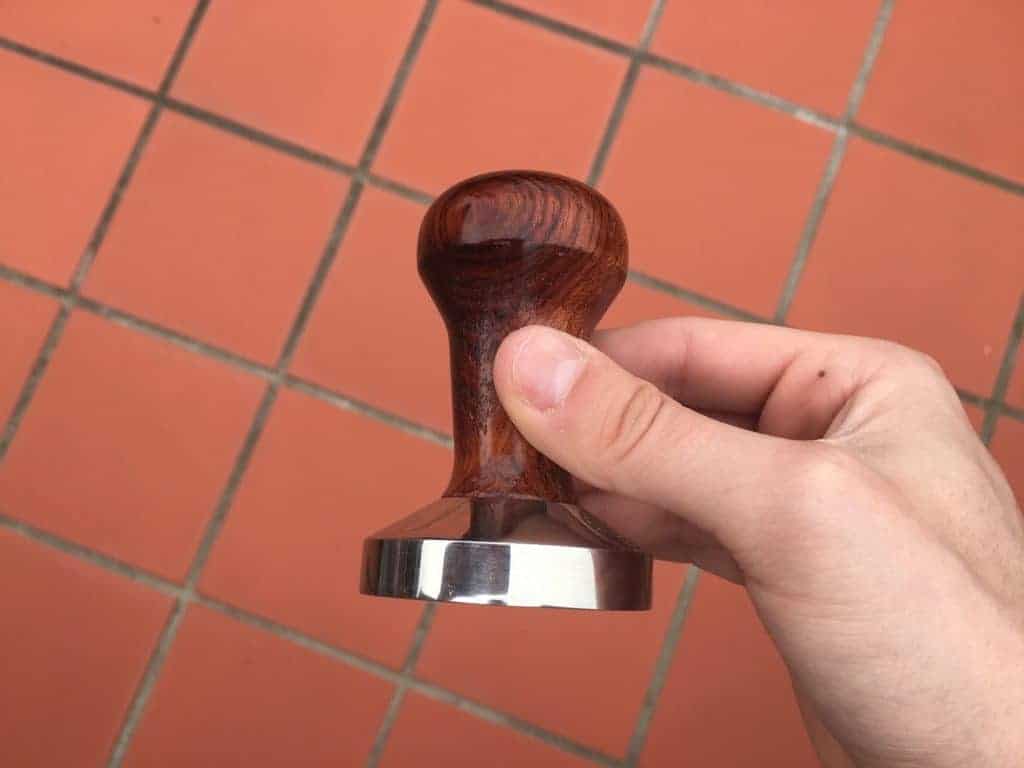 My flat tamper I use at home with rosewood handle.

As the name suggests flat tamper based are flat. This means that the entire base of the tamper is flush and in full contact with the coffee in your portafilter.

Convexed tampers on the other hand have a slight rise starting from the centre of the base moving towards the circumference.

So...what's the debate about?

It all comes down to which style of base does a better job at producing a consistent tamp that prevents "channelling."

Barista Tip: What Is "Channeling"

Channelling is when water rushes through the sides of the portafilter or cracks the espresso puck during the extraction process. This completely ruins your shot.

A consistent tamp allows for even distribution of the water during the espresso extraction process which in turn eliminates any risk of channelling.

Advoates of convex tampers say they better prevent channeling as the slight incline on convex tampers pushes coffee towards the edges of the portafilter, which prevents water from channelling along the sides as coffee blocks its path.

Convex tamper bases have a slight incline starting at the center.

Flat tamper lovers say that as long as you have good technique a convex tamper doesn't matter, further a flat tamper produces a slightly more flush tamp that may arguably result in a more even extraction.

As you can see these are very minute differences.

Personally I like using flat tampers over convex. This is simply due to personal preference as I like the feel of them when tamping - although I may be in the minority. But you can get just as good results with convex tampers.

What of tamper base do you prefer? Let's find out by voting below:

The Importance of Tamper Weight

I remember when I bought my first proper tamper for my espresso machine. As soon as I picked it up and felt some real weight in my hand I thought, "how on earth was I using my stock tamper for so long!"

Weight makes all the difference in my opinion.

Not only does it help you compress the coffee, but it also assists you in achieving a consist tamp motion.

So you should always opt for a nice heavy tamper - the experience is night and day when compared to your stock plastic one.

Calibrated tampers have a spring resistant mechanism between the tamper base and the handle.

The theory behind this is to force everyone in a cafe to exert the same pressure when tamping coffee.

But are they better than normal analogue tampers? Not necessarily.

As a good heavy tamper used by competent baristas will achieve the same results, plus you don't see any of the top baristas at the world coffee ﻿championships using calibrated tamps.

However there are situations where a calibrated tamper may be a better fit for you compared to normal tampers. 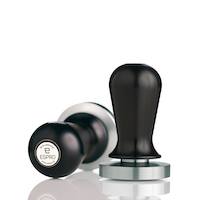 The Espro calibrated tamper is one of the original spring tampers popular with cafe owners. They come in both flat and convex style.

For example if you own a cafe with several baristas tending to a espresso machine throughout the day, a calibrated tamper will help your team achieve uniformity in their tamping technique.

This means less grind adjustments and more coffee being sold to customers, rather than being wasted trying to adjust the coffee grind between baristas.

That sums up my best coffee tamper guide. If you have any questions about tampers in general or anything coffee relate, post a comment below and I'll get back to you.

About the Author Ivan Bez

Ivan is the founder of Latte Art Guide and a barista with 5+ years of experience. He loves coffee and aims to help people improve their coffee making skills. Learn more about him here.

How To Steam Milk For Barista Coffee